Day 01: ARRIVE DELHI – FLY TO VARANASI International + Domestic Flight D
Arrive Delhi airport by morning flight. On arrival transfer to the domestic airport to board on your scheduled flight to Varanasi. Arrive Varanasi and transfer to the hotel for check in and overnight stay

Morning to explore the Ghats for Sunrise and explore by the boat ride on river Ganges.Varanasi situated on the bank of Ganges is the city of Shiva and the holiest for the Hindus. Varanasi is also known Benaras or Kashi. This city has been centre of learning for over 2000 years. Ganges is known as the river of salvation and people come here to leave this world and breathe here their last breath, so that they are out of the cycle of life and death and suffering, also known as Moksha. After that visit Sernath – 10 KM Northeast of Varanasi, where Budha Preached first time after he achieved enlightenment. In 3rd century B.C. Ashoka the great built stupas and monasteries and an engraved Ashoka pillar here. Muslim invaders destroyed the city and it was rediscovered by archaeologist in 18th century. Buddhist temples from half dozen nations has built there temples here. Afternoon start with your land journey to the next destination of Bodhagaya. Arrive Bodhgaya and check in to the hotel for a comfortable overnight stay. 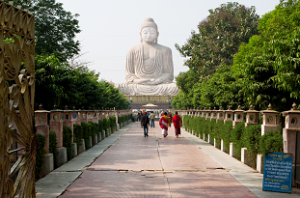 A day to explore Bodhgaya. Bodhgaya situated on the west bank of the river Niranjana, where Buddha finally abandoned years of rigorous fasting and asceticism by accepting milk rice and honey from Shepherdess.  After a bath in the river, he settled himself below the branches of Bodhi tree to meditation, finally enlightened in the full moon night.  Bodhgaya is the spiritual home of Buhddhists. After breakfast visit the Mahabodhi Temple which built by King Ashoka in 2250 years ago, the Bodhi tree, Niranjana River, Sujata Village. There are more than 20 monasteries built in the neighborhoods by different countries of the world.  Evening return to Hotel for overnight stay 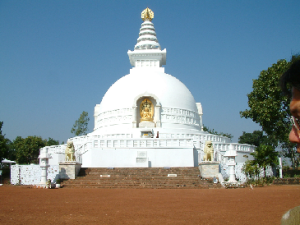 After breakfast drive to Vaishali visiting- Nalanda & Rajgir on the way. Rajgir –The picturesque Rajgir, or Rajagriha as it was known in the past (literally, the abode of kings) is surrounded by the meandering river Banganga and 5 hills. During the lifetime of the Buddha this was the capital of the powerful Magadhan kingdom, ruled by the virtuous King Bimbisara. The hills and caves surrounding Rajagriha were home to spiritual teachers, ranging from the materialism of the early Charavaka school to the metaphysics of Upanishadic philosophers. Like many others in search of truth, Prince Siddhartha, after he renounced his royal heritage came to this city to seek the path of vation. Nalanda –Nalanda was the most renowned university in ancient India. It derived its name from Na-alam-da, meaning Insatiable in Giving, one of the names by which the Lord Buddha was known. On completion drive to reach Vaishali for overnight stay. 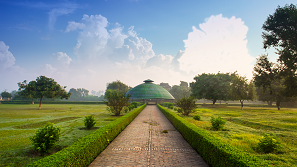 Morning to visit Vaishali, where Gautama Buddha delivered his last sermon at Vaishali and announced his Parinirvana here. A kilometre away is Abhishek Pushkarini, the coronation tank. The sacred waters of the tank anointed the elected representatives of Vaishali. Next to it stands the Japanese temple and the Vishwa Shanti Stupa (World Peace Pagoda) built by the NipponzanMyohoji sect of Japan. A small part of the Buddha’s relics found in Vaishali have been enshrined in the foundation and in the chhatra of the Stupa. Near the coronation tank is Stupa 1 or the Relic Stupa. On completion start with your land journey to reach your next destination of Kushinagar. Arrive Kushinagar and check in to the hotel for overnight stay.

In the morning proceed with the exploration tour of Kushinagar. Start with your prayer at Mahaparinirvana Temple. Buddha finally attained Mahaparinirvana at Kushinagar and it is another major pilgrims center for Buddhist. Amongst the ruins are the Mukutbandhan Stupa and a statue of the reclining Buddha.  On completion start with the land journey up to the Indo-Nepal border and after immigration drive to reach Lumbini. Lumbini – the birthplace of the Buddha, was located in 1890 after being untraced for 1,500 years. Overnight stay at Lumbini.

Morning to spend at Lumbini, while praying at the Maya Mandir. Lumbini was discovered by archaeologists in 1895 after being untraced for 1,500 years and is listed World Heritage Site by UNESCO.The Legendary Puskarini Pond where Queen Maya took a Bath before gave birth to prince Shakyamuni and the prince had his first bath too, the Ashoka pillar which built BC 249 and the Bodhi tree. Now in Lumbini have many temples which are built by Buddhist organizations from more than 20 countries.On completion drive till the border for immigration procedure and finally to reach Saravasti in the evening, visiting Kapilvastu on the way where the KingShuddhodhana Buddha’s father was ruling the ancient dynasty. Overnight stay at Saravasti.

Morning to indulge in prayers, visit Saheth – Maheth & Jetavana at Sravasti –  the capital of the ancient kingdom of Kosala, has the honour for sheltering Buddha for 24 rainy seasons in the Jetavana Gardens. The city believed to be founded by the mythological king Sravast and there are ancient stupas, majestic monasteries and several temples. Buddha is said to have performed some miracles here. After lunch start on our drive to Lucknow. Reach Lucknow in the evening and check in to the hotel for overnight stay.

After an early breakfast set off to the next destination of Agra visiting Sankisa on the way. The road journey today will be comparatively longer and on smaller roads. Mythical legends relate the place to the Buddha. It is believed that after delivering sermons to His mother and other devas in the Heaven, the Buddha returned to earth here at this place, Sankisa, which was considered the town of human abode. Because of this, Sankisa is counted amongst the pilgrim destinations for the Buddhist. Visit the Buddha Temple and Maya Temple, also the ruins of Ashokan elephant pillar if time permits. Drive further to reach Agra in the evening. Overnight stay at Agra. 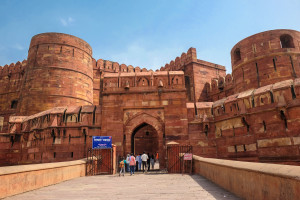 After breakfast visit Taj Mahal (Friday Closed) and Agra Fort. Taj Mahal is one of the most beautiful masterpieces of architecture in the world. Built entirely by white marble, Taj Mahal is regarded as one of the Seven Wonders of the World.  Some Western historians have noted that its architectural beauty has never been surpassed.  On completion visit Agra Fort. After lunch drive to Delhi.  On arrival ， Transfer to International airport to board on your scheduled International flight home.

PRIVATE, EXCLUSIVE, ESCORTED DEPARTURE CAN BE ARRANGED ON REQUEST

Cost for private tour provided based on number of person travelling, date of travel.