Arrive Kolkata airport. On arrival, met with your Odyssey Manager and transfer to Hotel.

Early morning transfer to the airport to board your scheduled domestic flight to Bagdogra.  On arrival at Bagdogra Airport meet and greet by your Odyssey Manager and drive through picturesque tea gardens to the world renowned hill station Darjeeling at an altitude of 2134 m. Darjeeling is set amidst a majestic backdrop of the great Himalayan peak of Kanchenjunga (3rd highest peak in the world at 8586 m) and is regarded as the Queen of East India. After dinner, enjoy your free and easy time browsing at the local bazaar. 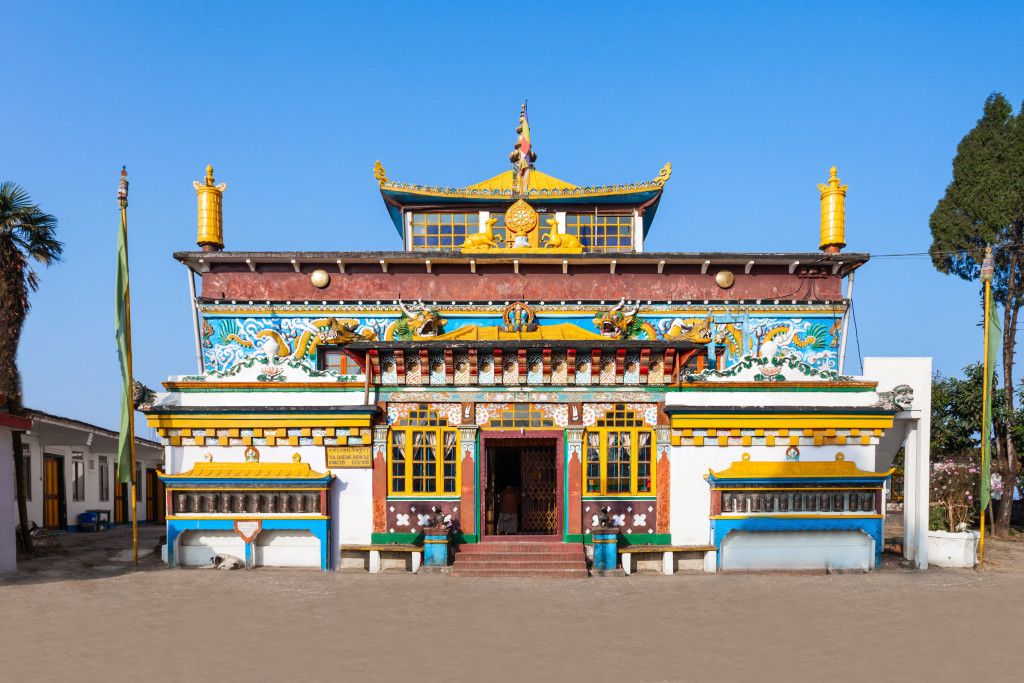 Set off early morning before sunrise between 4-6 am, drive to Tiger Hill (2685 m) to experience the panoramic view of the spectacular snow-clad mountain peaks of the High Himalayan Range where sun rises from this highest point in town. On our way back we visit the Ghoom Monastery, built in 1850 by Lama Sharb, which enshrines a 15ft. Statue of Maitreya Buddha.  After visiting the monastery we drive back to the Hotel for breakfast and spend some time relaxing before we take a walk through vegetable and meat market and then to the train station to board the Joy Ride Train to Ghoom.  Visit the Ghoom Museum on arrival.  After our lunch in Darjeeling, continue our visiting tour to the Tibetan Refugee Centre and the Tea Gardens, before returning to town around 1700 hour.  On arrival, spend your free time exploring or shopping around the market for shopping till 1900 h before returning to our Hotel. 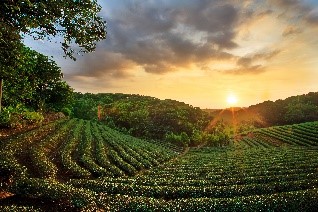 After breakfast drive to Gangtok, the capital of Sikkim. The journey is an exhilarating experience along the Tista River and through green forest and picturesque landscape. Gangtok – the capital of Sikkim, tucked away in the clouds. Gangtok is spread out on a ridge 1520m above sea level, and looks something out of a fairy tale with houses precariously balanced on the slopes of steep hills apart from the gorgeous view of deep valleys, waterfalls and snow-capped mountain ranges that separate from neighbouring Tibet, Bhutan and Nepal. On arrival, check in to hotel and relax for the rest of the evening.

After breakfast, drive to Tsomgo Lake, also known as The Source of the Lake (3,780 m). Warm clothing is needed for this place. The lake derives its water from melting snow from the surrounding mountains, which is one of the famous sacred lakes in Sikkim, situated near the borders of Tibet. Observe the array of scenery on the spectacular drive back to the hills. Take your time to explore around the lake before driving back to Gantok.  Spend the rest of your afternoon relaxing or shopping in the market.

Today, we leave for North district of Sikkim to a small village, Lachung (2,400 m). This spectacular drive will take about 6-7 hrs (lunch en-route). If weather is clear, you will be able to see the magnificent range of the third highest mountain in the world, Kanchenjunga. Arrive Lachung in the late afternoon and check in at a lodge. (Please note that the facilities here are very basic as this place is one of the remotest in Sikkim).

After breakfast, we leave for Yumthang (3,500 m) excursion. This panoramic drive will bring you to the Valley of Flowers which consists of about 36 species of rhododendrons, primulas and other spectacular alpine wild flowers. Yaks and dzos (a hybrid between cow and yak) can be seen grazing on the meadows. On the way back, walk across the Lachung Chu and enjoy an optional dip in a hot spring. 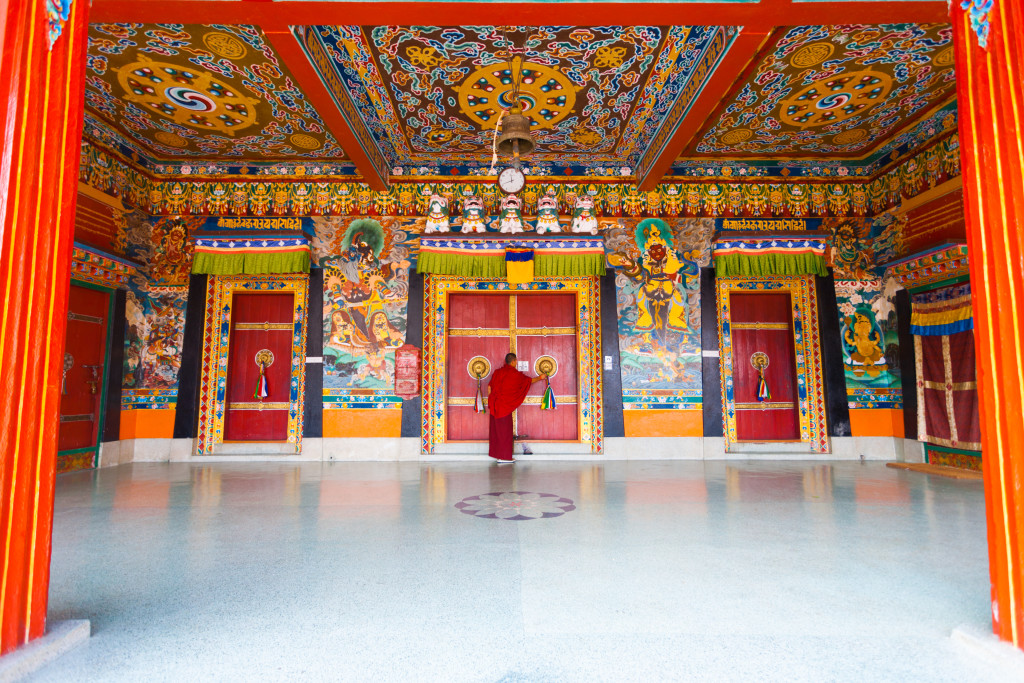 After breakfast drive to visit Rumtek monastery. Rumtek served as the main seat of the Karma Kagyu lineage in Sikkim for some time. But when Rangjung Rigpe Dorje, 16th Karmapa, arrived in Sikkim in 1959 after fleeing Tibet, the monastery was in ruins. Despite being offered other sites, the Karmapa decided to rebuild Rumtek.  On completion drive to Singtam for Lunch.  After lunch drive Rawangla to visit Tathagata Tsal also known and Buddha Park.  It was constructed between 2006 and 2013 and features a 130-foot high statue of the Buddha as its centerpiece. The site was chosen within the larger religious complex of the Rabong Gompa (Monastery), itself a centuries-old place of pilgrimage.  After visiting Tathagata, drive to Namchi and transfer to Hotel. Namchi commands panoramic view of the snow-capped mountains and vast stretches of valley. It is also headquarters of South Sikkim district. 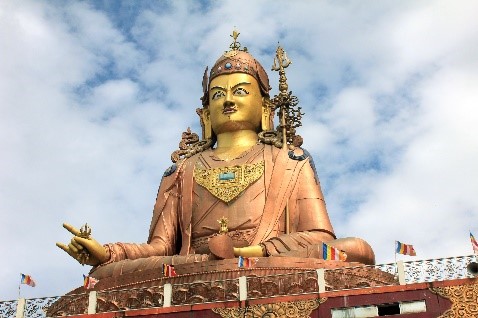 After breakfast drive to Samdruptse – the world’s largest statue (at 118 feet) of the Buddhist Padmasambhava, also known as Guru Rinpoche, the patron saint of Sikkim, is on the Samdruptse hill (The Wish Fulfilling well) opposite Namchi.  It was completed in February 2004. It is also said that the Samdruptse hill is actually a Dormant Volcano. Myths say that the buddhist monks have been going on top of the hill and offering prayers to the volcano to keep it calm.  On completion drive to visit recently inaugurated (November 2011) Siddhesvara Dhaam where you can view 87 ft statue of Lord Shiva and replicas of four Dhaams of the country at one place at Solophok hilltop in Namchi. The four most revered Dhams of the Hindus Jagannath, Dwarika, Rameshawaram, Badrinath.  After visiting we drive to visit Sai Temple.  Return to Hotel for Lunch.  After lunch drive through picturesque tea gardens to the world renowned hill station Kalimpong. After dinner, enjoy your free and easy time browsing at the local bazaar.

Morning visit Deolo Hill to enjoy scenic view of the landscape.  Return to Kalimpong and enjoy early lunch and then drive Bagdogra airport to board on your scheduled flight to domestic flight. On arrival, settle your own dinner and then transfer yourself to International terminal.

*Sightseeing & visiting time is not included in drive time