About Sikkim: Small but beautiful, Sikkim is situated in the eastern Himalayas. The state is spread below the Mount Khanchendzonga (8534 mts), the third highest mountain in the world, revered by the Sikkimese as their protective deity. Sikkim is one of the smallest state in India with an area of just 7,300 sq kms between the altitude ranges from 300 meters to over 8540 meters above sea level. Amidst the grandeur of the mountain peaks, lush valleys, fast flowing rivers, hills, Sikkim offers visitors a rare and singular experience. Within a matter of hours one can move from the sub tropical heat of the lower valleys to the cold of the rugged mountain slopes that reach up to the area of perpetual snow.

Namchi is a major tourist attraction and pilgrimage centre.  The best places to visit include 130 feet Lord Buddha Statue at Buddha Park of Ravangla, also known as  Tathagata Tsal, before reaching Namchi, 118 feet Guru Padmasambhave on top of Samdruptse hill, 87 feet statue of Shiva and replicas of four Dhaams at Siddhesvara Dhaam and Sai Temple

About Bhutan: The Kingdom of Bhutan, a gem in the eastern Himalayas, areas 38,394 square km. and is populated with just little above 750,000. Looking from a natural side, fauna and flora flourishes in great varieties as the terrain rises from southern foothills (150m above sea level) to unclimbed peaks over 7000m. The kingdom is one of the leading countries in environmental conservation. Over 70% of Bhutan’s land area is still under forest cover. One of the most striking physical features of Bhutan is its architecture.

Tiger’s Nest may like to experience 8th century and follow the trails of Guru Padmasambhava’s legendary travel through Bhutan. Legend says that he flew to the cliff s of Taktsang on the back of a tigress. Taktsang temples (Tiger’s Nest), built on the cliff s above the valley of Paro, is one of the highest holy Buddhist spots in the world and listed in 1000 best places to see before you die. 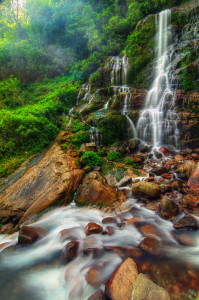 Arrive in the morning by Druk air and board on connecting flight to Bagdogra.      On arrival at Bagdogra Airport meet and greet by your Odyssey Manager and drive through picturesque tea gardens to the world renowned hill station Darjeeling at an altitude of 2134 m. Darjeeling is set amidst a majestic backdrop of the great Himalayan peak of Kanchenjunga (3rd highest peak in the world at 8586 m) and is regarded as the Queen of East India. After dinner, enjoy your free and easy time browsing at the local bazaar.

Set off early morning before sunrise between 4-6 am, drive to Tiger Hill (2685 m) to experience the panoramic view of the spectacular snow-clad mountain peaks of the High Himalayan Range where sun rises from this highest point in town. On our way back we visit the Ghoom Monastery, built in 1850 by Lama Sharb, which enshrines a 15ft. Statue of Maitreya Buddha.  After visiting the monastery we drive back to the Hotel for breakfast and spend some time relaxing before we take a walk through vegetable and meat market and then to the train station to board the Joy Ride Train to Ghoom.  Visit the Ghoom Museum on arrival.  After our lunch in Darjeeling, continue our visiting tour to the Tibetan Refugee Centre and the Tea Gardens, before returning to town around 1700 hour.

After breakfast drive to Gangtok, the capital of Sikkim. The journey is an exhilarating experience along the Tista River and through green forest and picturesque landscape. Gangtok – the capital of Sikkim, tucked away in the clouds. Gangtok is spread out on a ridge 1520m above sea level, and looks something out of a fairy tale with houses precariously balanced on the slopes of steep hills apart from the gorgeous view of deep valleys, waterfalls and snow-capped mountain ranges that separate from neighbouring Tibet, Bhutan and Nepal. On arrival, check in to hotel and relax for the rest of the evening. 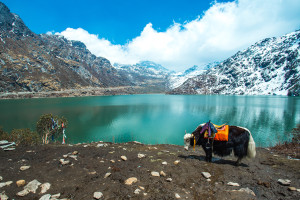 After breakfast, drive to Tsomgo Lake, also known as The Source of the Lake (3,780 m). Warm clothing is needed for this place. The lake derives its water from melting snow from the surrounding mountains, which is one of the famous sacred lakes in Sikkim, situated near the borders of Tibet. Observe the array of scenery on the spectacular drive back to the hills. Take your time to explore around the lake before driving back to Gantok.  Spend the rest of your afternoon relaxing or shopping in the market.

Today, we leave for North district of Sikkim to a small village, Lachung (2,400 m). This spectacular drive will take about 6-7 hrs (lunch en-route). If weather is clear, you will be able to see the magnificent range of the third highest mountain in the world, Kanchenjunga. Arrive Lachung in the late afternoon and check in at a lodge. (Please note that the facilities here are very basic as this place is one of the remotest in Sikkim).

After breakfast, we leave for Yumthang (3,500 m) excursion. This panoramic drive will bring you to the Valley of Flowers which consists of about 36 species of rhododendrons, primulas and other spectacular alpine wild flowers. Yaks and dzos (a hybrid between cow and yak) can be seen grazing on the meadows. On the way back, walk across the Lachung Chu and enjoy an optional dip in a hot spring.

After breakfast drive to visit Rumtek monastery. Rumtek served as the main seat of the Karma Kagyu lineage in Sikkim for some time. But when Rangjung Rigpe Dorje, 16th Karmapa, arrived in Sikkim in 1959 after fleeing Tibet, the monastery was in ruins. Despite being offered other sites, the Karmapa decided to rebuild Rumtek.  On completion drive to Singtam for Lunch.  After lunch drive Rawangla to visit Tathagata Tsal also known and Buddha Park.  It was constructed between 2006 and 2013 and features a 130-foot high statue of the Buddha as its centerpiece. The site was chosen within the larger religious complex of the Rabong Gompa (Monastery), itself a centuries-old place of pilgrimage.  After visiting Tathagata, drive to Namchi and transfer to Hotel. Namchi commands panoramic view of the snow-capped mountains and vast stretches of valley. It is also headquarters of South Sikkim district. 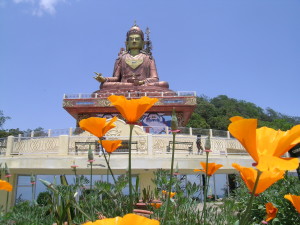 After breakfast drive to Samdruptse – the world’s largest statue (at 118 feet) of the Buddhist Padmasambhava, also known as Guru Rinpoche, the patron saint of Sikkim, is on the Samdruptse hill (The Wish Fulfilling well) opposite Namchi.  It was completed in February 2004. It is also said that the Samdruptse hill is actually a Dormant Volcano. Myths say that the buddhist monks have been going on top of the hill and offering prayers to the volcano to keep it calm.  On completion drive to visit recently inaugurated (November 2011) Siddhesvara Dhaam where you can view 87 ft statue of Lord Shiva and replicas of four Dhaams of the country at one place at Solophok hilltop in Namchi. The four most revered Dhams of the Hindus Jagannath, Dwarika, Rameshawaram, Badrinath.  After visiting we drive to visit Sai Temple.  Return to Hotel for Lunch.  After lunch drive through picturesque tea gardens to the world renowned hill station Kalimpong.  On arrival visit Dr Graham’s Home. After dinner, enjoy your free and easy time browsing at the local bazaar.

After breakfast drive to Phuentsholing and met by our Bhutan representative, after clearing immigration formalities, check in at the Hotel.  Visit Zangtho Pelri: Situated in city centre, this small temple represents the heaven of Guru Rinpoche. On ground floor there are statues of eight manifestations of Guru Rinpoche and paintings on Buddha’s life while the next floor contains eight Bodhisattavas and statues of Avalokiteshvara and Shabdrung Ngawang Namgyal. On top floor, there is a main statue of Amitabha.  Later in the evening explore the local market.

After breakfast drive to Thimphu. 4 km ahead of Phuentsholing, visit Kharbandi Gompa, the beautiful monastery situated in garden of tropical plants and flowers. The monastery contains paintings depicting scenes from the life of Buddha and statues of Shabdrung Ngawang Namgyal and Guru Rimpoche. From the monastery garden there is a splendid view of Phuentsholing and plains of West Bengal and their tea gardens beyond.  Proceed further to Thimphu. This entire drive is very pleasant with numerous scenic spots en route. Lunch would be served at Bunakha cafeteria, Fives miles, before Thimphu, visit Simtokha Dzong, the oldest fortress of the Kingdom which now houses the School for religious and cultural studies. After checking into hotel proceed on to visit Trashichhodzong, the beautiful medieval fortress/monastery which houses most of the Government’s office and King’s Throne room It is also the summer residence of Je Khenpo, the Chief Abbot. Later visit National Memorial Chorten. 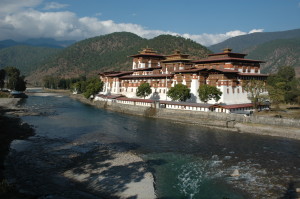 Drive to Dochula (‘la’ means mountain pass)，a historical significance pass was the ancient route connecting western and central Bhutan.  The leisure drive from Thimpu to Dochula is fascinating, take about 45 minutes uphill to the first mountain pass, Dochula, in the western part of Bhutan.  As you reach the pass, you find the 108 Druk Wangyal Chortens on the top of the pass where the ridges, draped in colorful prayer flags greet you. You could walk three rounds and offer prayers, take some best photo shots. If the weather is clear, you will be able to see the highest peaks towards the north, Gangar Punsum (24,836 ft), is one of the highest unclimbed peaks in the world.  Arrive Punakha drive to Metshina Village and visit Chimi Lhakhang, a monastery especially for pilgrimage, particularly women seeking blessings to beget children. Continue to visit Punakha Dzong which was built in 1637 by Zhabdrung Ngawang Namgyal to serve as the religious and administrative seat of the region.  It is built strategically at the intersection of the Mo Chhu and Pho Chhu rivers.  O/n at Punakha.

After breakfast drive back to Paro, on the way enjoy breathe taking view of the Himalayan ranges on Dochula once again, arrive Paro visit Paro Dzong a fortress-monastery overlooking the Paro valley has a long history began in 1644 and Ta Dzong the National Museum housed in a round fortress considered to be one of the best natural history museums in Asia where it has a fine collection of natural and historic artifacts..  Free time for shopping.   O/n at Paro.

After breakfast, drive to Haa valley, it was one of the main commercial gateways until roads opened through Phuentsholing in the earlier 1960s. The route via Haa was an important access for the Bhutanese just as the Silk Route was for many Himalayan countries. The Haa district is characterized by the picturesque Haa valley where wheat, barley, apples, potatoes and chillies are grown. You will be driving through picture square Chele la (3988m), a favourite place for many visitors which is one of highest motorable passes in the country. For the Buddhists, it is also a sacred place to festoon the pass with prayer flags. The great Buddhist master Guru Rinpoche, the 2nd Lord Buddha, visited Haa Valley in the 8th Century, imbuing the local population with his sacred Buddhist teachings.  These Buddhist legends and beliefs of the people are still preserved in a traditional way in the local festivals, rituals, myths, stories and traditional dances.  The Wangchulo Dzong is one of Bhutan’s newest, built in 1915 to replace a smaller structure. It is an impressive chorten that marks the entrance of several army offices, houses and a rations shop.

Transfer to the Airport and fly to Singapore.