Arrive Delhi airport.  On arrival meet and greet by your OM and transfer to Hotel.

After breakfast visit Qutub Minar and Lotus Temple.  Qutub Minar is one of the most visited tourist spot of Delhi, Qutub Minar was built in 1199 by Qutub-ud-Din. The sultan’s successor and son-in-law, Iltutmish, completed it. The purpose of building this beautiful monument is not very clear as some believe that it was built as a tower of victory to signify the beginning of the Muslim rule in India, while others say it served as a minaret to the adjoining mosque and was used by the muezzins to call the faithful to prayer. It is 72.5 metres high and one has to climb 379 steps to get to the top.The diameter of the base is 14.3 metres while the top floor measures 2.7 metres in diameter. On completion drive to visit the lotus temple surrounded by a landscaped garden and is a symbol of peace.  This is the Asian headquarters of the Bahai faith, and a circular temple that is open to all.  Afternoon around 1500 hour drive 200km/4 hours to Agra.  In the 16th and 17th century Agra was the capital of India.  Most of its monuments and forts are constructed in that era.  On arrival transfer to Hotel. 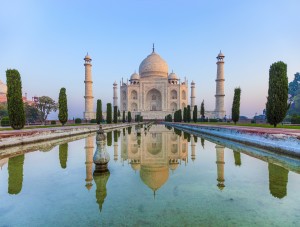 Early morning, visit one of the 7 wonder of the World, Taj Mahal, the beautiful white marble architecture was built by Mughal Emperor

Shah Jahan in memory of his beloved wife Mumtaz Mahal, died during the birth of their 14th child. Visit Agra Fort – the crescent shaped fort that was commissioned and constructed with deep moats surrounding the outer 2.4 km wall facing the river and provides a good view of Taj Mahal. The fort was built by Great Emperor Akbar in 1565 A.D.  On completion visit shops with craftsman working on marble inlay and carpet weaving.

After lunch, drive to Jaipur, 237 km/over 5 hours’ drive, en route visiting the world heritage monument of Fatehpur Sikri (the City of Victory), built during the second half of the 16th century by the Emperor Akbar. It was the capital of the Mughal Empire for 10 years. Drive to Jaipur and check in your hotel. 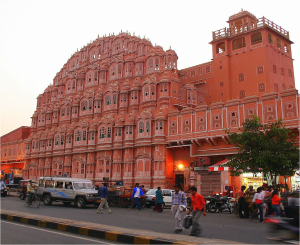 Drive to Hawa Mahal for photo stop and then drive to Amber Fort. The rugged, time-ravaged walls of the Fort may not look beautiful from the outside, but the interiors are virtually paradise. Miniatures painted on the walls depict hunting and war scenes, apart from festivals. Precious stones and mirrors are embedded into the plaster. Visit Jag Mandir or the Hall of Victory and famed Sheesh Mahal – a room with all the four walls and ceiling completely embedded with glittering mirror pieces, specially imported from Belgium. Visit semi-precious stone cutting and Rajasthani handicraft center.

After lunch we start city tour visiting Maharaja’s City Palace, the former Royal residence, part of it converted into a museum. A small portion of the Palace is still used by the Royal family of Jaipur. Built in the style of a fortified campus, the palace covers almost one-seventh of the city. One of the major attractions in the museum is the portion known as Armoury Museum housing an impressive array of weaponry-pistols, blunderbusses, flintlocks, swords, rifles and daggers. The royal families of Jaipur once used most of these weapons. Just outside the Palace we visit Jantar Mantar – the largest stone and marble crafted observatory in the world. This observatory has 17 large instruments and most are still in working condition.

After breakfast start with your land journey back to Delhi. Afternoon drive to visit Akshardham Temple, Swaminarayan Akshardham in New Delhi epitomises 10,000 years of Indian culture in all its breathtaking grandeur, beauty, wisdom and bliss. It brilliantly showcases the essence of India’s ancient architecture, traditions and timeless spiritual messages. The Akshardham experience is an enlightening journey through India’s glorious art, values and contributions for the progress, happiness and harmony of mankind. Remain at the temple until the completion of Sound and Light show.  In the evening proceed for dinner and overnight stay at Hotel.

You have another day to spend at Delhi. Enjoy your breakfast at your hotel and on time to embark on an exploration spree of Delhi town. Pay your visit to Raj Ghat, the memorial of Mahatma Gandhi, the Father of the Nation. A black stone platform in an open air complex marks the spot where Gandhi was cremated. A flame constantly burns at one end of the platform and visitors are required to remove their footwear before they enter Raj Ghat. Also close to the Raj Ghat is the memorial of Jawaharlal Nehru, known as Shantivan. Rest of the day at leisure to explore the shopping possibilities in the vast areaof New Delhi. After an early dinner transfer to the airport to board on your scheduled flight home sweet home.

Note: Sequence of itinerary may change due to operational reasons