Maharashtra: Spread over 118,809 square miles (307,710 square km), Maharashtra is the third-largest state by area. It is bordered by the Arabian Sea to the west and the Indian states of Karnataka, Telangana, Goa, Gujrat, Chhattisgarh, Madhya Pradesh and the Union territory of Dadra and Nagar Haveli. The major rivers of the state are Godavari, Krishna, Narmada and Tapi. Maharashtra is one of the wealthiest and the most developed states in India, contributing 25% of the country’s industrial output and 23.2% of its GDP (2010–11) as of 2011.

Mumbai: Ancient yet modern, fabulously rich yet achingly poor, Mumbai is India in microcosm. Once a sultry tropical archipelago of seven islands, and the Raj’s brightest jewel, Mumbai was the dowry of Portuguese Princess Infanta Catherine de Braganza who married Charles II of England in 1661. Today it’s a teeming metropolis, commercial hub of an old civilization seeking to find its place in the New World Order.  Forty percent of India’s taxes come from this city alone, and half of India’s international trade passes through its splendid natural harbour.

Arrive Mumbai airport.  On arrival meet and greet by your Odyssey Manager & transfer to Hotel. Originally comprising seven islands, Mumbai is now the financial center of India. Overnight at Mumbai. 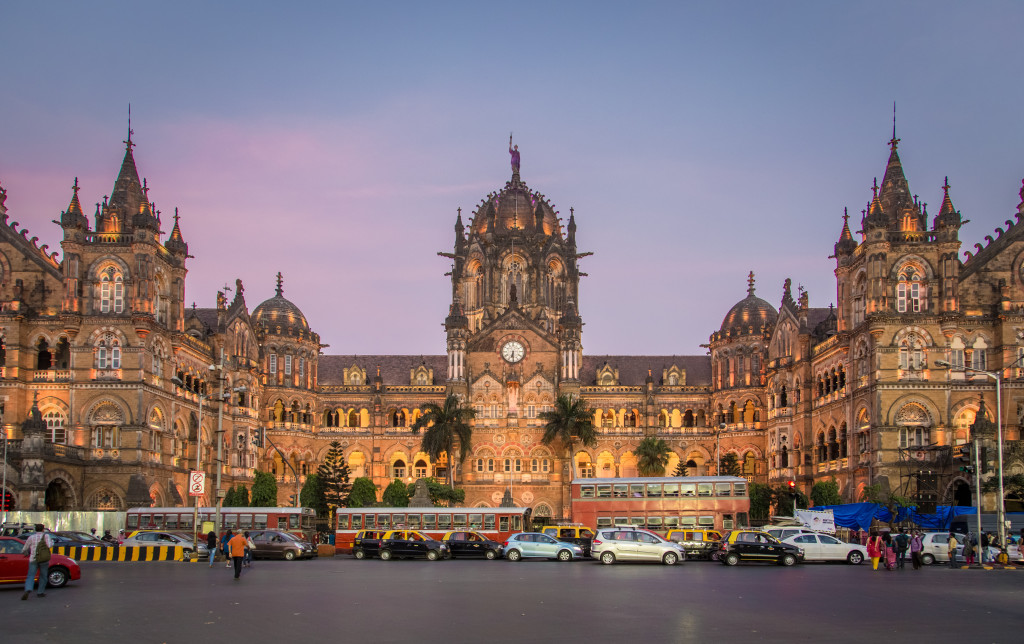 MUMBAI, INDIA – 17 JANUARY 2015: Chhatrapati Shivaji Terminus at sunset. It serves as headquarters of the Central Railways.

Morning proceed to gateway of India, build to commemorate the landing of King George V and Queen Mary in 1911. It is situated past the Council Hall and towards the sea. Here we board on boat here to visit UNESCO World Heritage Site Elephanta Caves at Gharapuri Island, renamed Elephanta Island by the Portuguese. After lunch, we drive past Victoria Terrminus and then drive to Hanging Garden and Mani Bhawan. We also visit the Marine Drive, which was built in the 1920s and 1930s on land reclaimed from the sea. It is Mumbai’s most famous pathway, where people walk and sit in the evenings. It is also known as “Queen’s Necklace” because of the dramatic line of street lamps lit up at night that surrounds the beach. Recently its name has been changed to “Netaji Subhashchandra Bose Road”. Marine Drive is a fun place to be; here you can enjoy yourself by watching children playing with sand and vendors selling toys and food. Evening Free & Easy.

Leave hotel after breakfast and drive to Pune. On arrival, transfer to Hotel. After lunch, drive to visit the Raja Dinkar Kelkar Museum contains the collection of Dr. Dinkar G. Kelkar (1896–1990), dedicated to the memory of his only son, Raja. The three-floor building houses various sculptures dating back to the 14th century. There are also ornaments made of ivory, silver and gold, musical instruments and (a particularly fine collection of) war weapons and vessels.  The museum now holds over 20,000 objects and 2,500 selected objects are on display. These consist of mainly Indian decorative items from everyday life and other art objects, mostly from the 18th and 19th centuries. One part of particular interest is the “Mastani Mahal”. Raja Kelkar made an attempt at depicting the palace of Mastani, (wife of the Peshwa Baji Rao I) with its remnants.  On completion shop around in town.

Drive to Shirdi via Ahmednagar. On arrival, transfer to Hotel. In the afternoon, visit Samadhi Mandir of Shri Sai Baba. Sai Baba remains a very popular saint, especially in India, and is worshiped by people around the world. He had no love for perishable things and his sole concern was self-realization. He taught a moral code of love, forgiveness, helping others, charity, contentment, inner peace, and devotion to God and guru. He gave no distinction based on religion or caste. Shirdi Baba Statue is built with white marble stones. The railings around it are full of ornamental decorations. The idol of Baba is a magnificent statue made up of Italian marble built by Late Balaji Vasant in 1954. 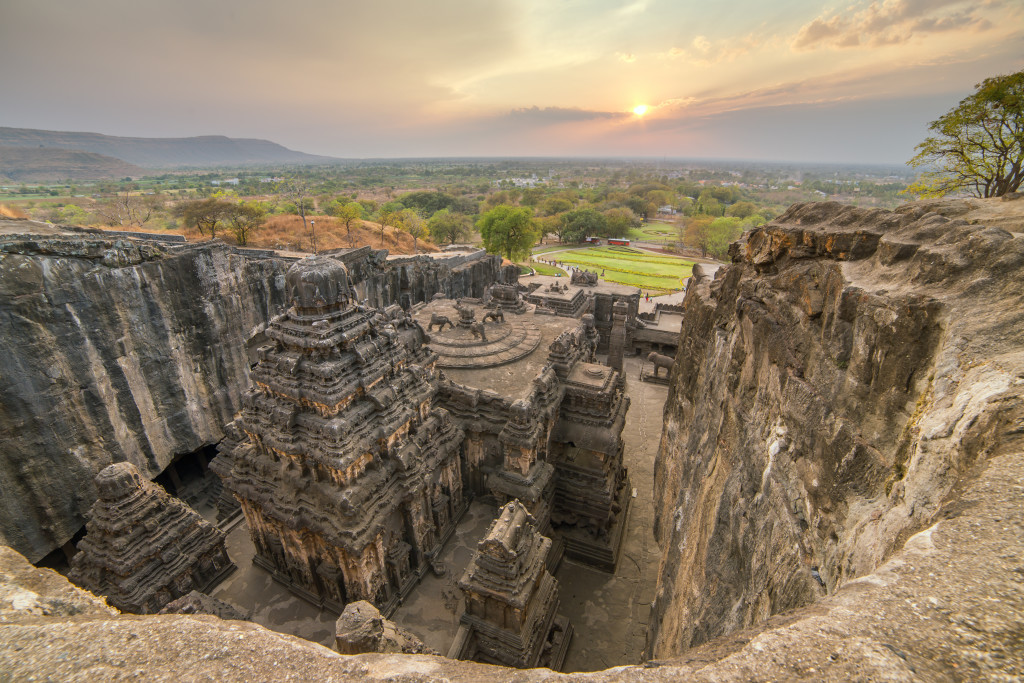 After breakfast, drive to visit of Ellora caves. The architecture and the carvings of the 34 monolithic cave temples in Ellora are truly awesome and breathtaking in their grand scale and design. The temples here are from a later period than those at Ajanta (350 AD to 1000 AD), and include Hindu and Jain monuments as well. (13 Buddhist, 16 Hindu and 5 Jain). The most incredible feature is that they were chiseled top downwards from a 2 km sheer rock escarpment. 109 feet wide and 164 feet long, Kailasa Temple, carved from a single rock is sheer size and architectural finesse completely stuns anyone. On completion drive to visit Grishneshwar Jyotirlinga Temple. On completion drive further to reach Aurangabad. Overnight stay at Aurangabad.

After breakfast, drive around 2.5 hours to reach Ajanta Caves, a party of British officers discovered this group of 30 caves hidden behind dense undergrowth and excavated out of a steep horseshoe shaped gorge. The Ajanta caves were chiseled out by Buddhist monks between 200 BC and 650 AD as ‘chaityas’ (prayer halls) and ‘viharas’ (monasteries), and contain exquisite frescoes and fine sculptures. Each cave has its own story to tell. On completion drive back to Aurangabad for overnight stay.

After breakfast we drive 190 km, 4 hours to Nashik. On arrival, we enjoy our lunch. After lunch, we start our wine tour to visit two major wineries at Nashik. Sula Vineyards is India’s most popular winery. From humble beginnings in 1999, Sula Vineyards has admirably developed into a world class winery with a market share of more than 70% in India.  Our next stop is York Winery built in 2006, York Winery occupies seven acres of vineyards overlooking Gangapur Dam, close to Sula Vineyards. This friendly, young, family-owned winery focuses on producing fruity and dry, rather than sweet, wines. It’s definitely going places and is already winning awards. The winery has a superb gold medal Reserve Shiraz, aged in oak, to its name. Also impressive is its new Arros reserve blend of shiraz and cabernet sauvignon, released in late 2014. York released its own sparkling wine, York Sparkling Brut, near the end of 2014 as well. It’s made from 100% chenin blanc grapes. The sizable tasting room is attractively decorated in warm, earthy tones. Calmer and less commercialized than Sula, it’s a great sunset destination.

After breakfast, drive around 160 km to reach Mumbai. On arrival, we spend time for last minute shopping at different markets and shopping centers.  In time, transfer to the airport to board on your scheduled flight home.

Note: Sequence of itinerary may change due to any other operational reasons  – Major Exclusions: Indian Visa and Travel Insurance only