You are booking for : HIMALAYAS ON WHEELS Part 3 – Srinagar to Ladakh (Land) 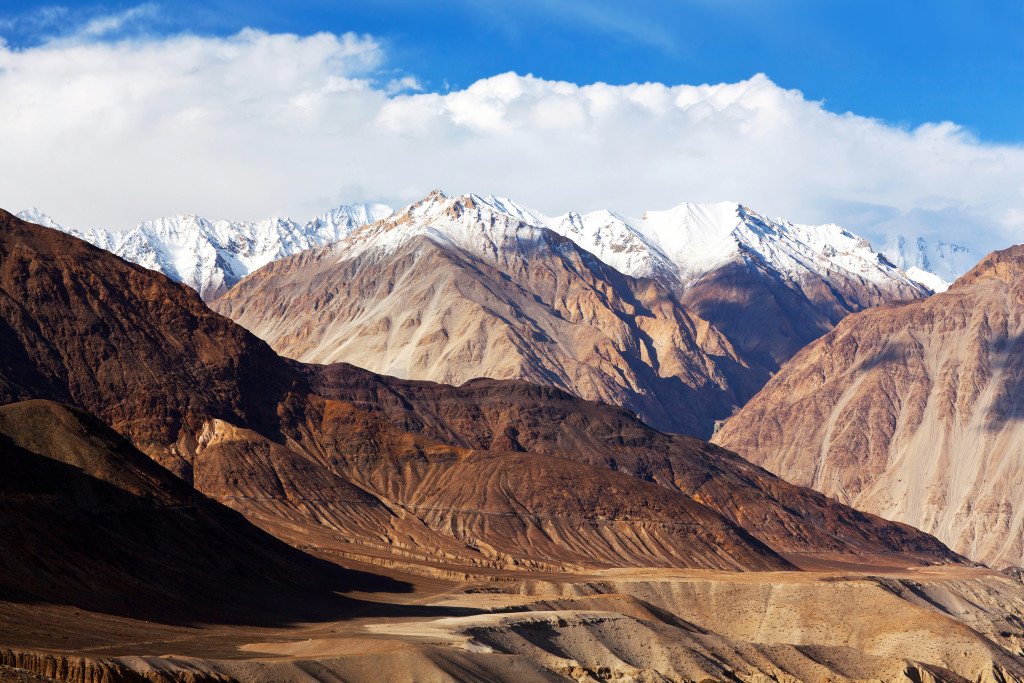 Kashmir set like a jeweled crown on the map of India, is a multi-faceted diamond, changing its hues with the seasons – always extravagantly beautiful. Two major Himalayan ranges, the Great Himalayan Range and the Pir Panjal, surround the landscape from the north and south respectively. They are the source of great rivers, which flow down to the valleys, forested with orchards and decorated by lily-laden lakes. The capital city of Srinagar is located 1585 meters above mean sea level. According to a popular legend which is mentioned in Kalhana’s Rajtaringini Kashmir valley was a vast lake. Kashyap Rishi drained out the water and made it habitable.

Ladakh – The Last Sangrila the high altitude desert, in the Trans Himalayas, is bounded by two of the world’s mightiest mountain ranges, the Karakoram in the north and the Great Himalaya in the south, it is traversed by two other parallel chains, the Ladakh Range and the Zanskar Range. In geological terms, this is a young land, formed few million years ago. Today a high-altitude desert, sheltered from the rain-bearing clouds of the Indian monsoon by the barrier of the Great Himalaya, Ladakh was once covered by an extensive lake system, the vestiges of which still exist on its south-east plateau of Rupshu and Chushul, in the drainage basins of lakes of Tso-moriri, Tso-kar and Pangong-tso.

Fly to Delhi.  On arrival transfer to domestic airport to board on your scheduled flight to Srinagar – located in the heart of the Kashmir valley at an altitude of 1,730 m above sea level, spread on both sides of the river Jhelum. The Dal and Nagin lakes enhance its picturesque setting, while the changing play of the seasons and the salubrious climate ensures that the city is equally attractive to visitors around the year. On arrival, transfer to anchored Deluxe Houseboat.

After breakfast at Houseboat, depart by surface to Gulmarg – one of the most beautiful summer resorts in Kashmir valley. It is also well known for its golf course during summer season and ski resort during the winter season. Enjoy the splendour of nature and the snowy mountains. Enjoy Gondola ride (Cable car) from Gulmarg to Kungdoor. Afternoon return back to Srinagar and take a stroll to witness the way of life in the alleys and small streets of Srinagar town. Dinner served at your houseboat. 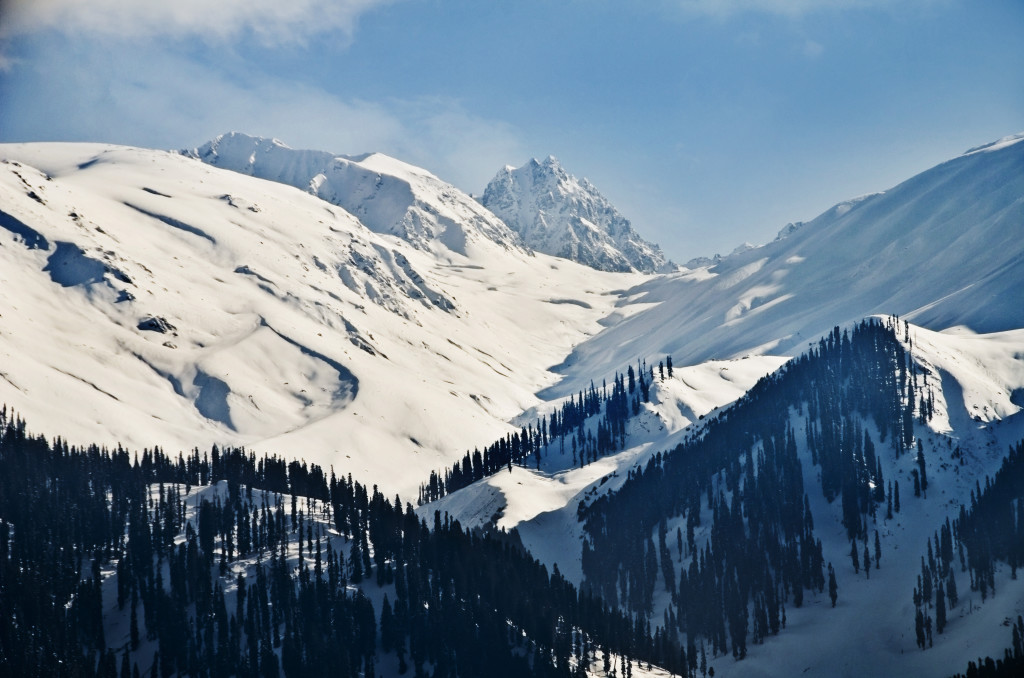 After breakfast start the spectacular journey to Sonamarg by car. About 2.5 hours to cover around 80 km through the rural civilization along with meandering Sindh River. Sonamarg lies at the head of the Sindh valley, is surrounded by mountains and pine forests. Drive through spectacular facets of countryside.  After Sonamarg start drive up to first pass on our route, Zojila Pass (3529 m).  Zojila Pass marks dramatically the boundary line between Kashmir and Ladakh. Dense green forest clad slopes give way to bare multi-colored mountains of stark beauty. Drive through Drass Town en-route, the second coldest inhabitant place in the world. You will notice a sudden change of landscape from lush green to barren Himalayan mountain ranges in a small transition. Overnight at hotel in Kargil.

After breakfast drive to Alchi stopping at Mulbekh where a 1400 years old image of Maitry-the future Buddha, built atop a huge rock. The image commemorates the victory of Buddhism over Bonism, and in turn, the end of sacrificing of human and animal lives. We drive over Fotula Pass (4108 m) and Namikala Pass (3718 m) the highest point on the Leh – Srinagar road. En route visit Lamayuru monastery, Atitse Monastery and Naropa Cave.  Lamayuru is one of the most significant gompa set amidst majestic scenery. The 900 years old finest monastery in Ladakh, houses the image of Chanaric – The God of Compassion and Mercy – of which Dalai Lama is considered to be reincarnated.  We make a quick photo-stop at Moonland before we continue our journey to Alchi. In the evening visit Alchi Monastery. The monastery was founded in 11th century by the great Monk & Translator, Rinchen Zangpo. On completion drive to Leh for overnight stay.

A day to explore the surroundings of Leh town. We walk to Shanti Stupa followed by walk to Leh Palace. You can shop for turquoise and silver jewellery that come from Tibet and Burma. Main Market in Leh is a wonderful place to shop. Two of the places that are worth checking are Ladakh Art Palace and Lhasa Embroidery. Tibetan Refugee Market on Old Leh Road is another ideal place for shopping in Leh. For Tibetan-Ladakhi items of art one can head to Government Emporium. Popular souvenirs picked up by tourists include, Thangka paintings, small prayer wheels, music bowls, Ladakhi carpets, rugs, shawls and stoles.

After a nice breakfast at your hotel start your drive to Nubra valley via Khardungla (Highest motorable road in the world, 18,380 ft). From Khardungla you can have stunning view of Indus Valley and the Karakoram ranges if the weather remains very clear. Later descend down to Nubra Valley; Local scholars say that its original name was Ldumra (the valley of flowers). The Shyok River meets the Nubra or Siachan River to form a large valley that separates the Ladakh and Karakoram Ranges. Afternoon stroll to a small sand dune in Hunder where you can enjoy a camel ride on two hump camels, specific to Nubra Valley only. The domesticated Bactrian camel has served as a pack animal in inner Asia since ancient times. With its tolerance for cold, drought, and high altitudes, it enabled travel such as the caravans of the Silk Road. The wild form has dwindled to a population estimated at 800 in October 2002 and has been classified as critically endangered on the IUCN Red List of Threatened Species. Its range in the wild is restricted to remote regions of the Gobi and Taklamakan Deserts of Mongolia and China, migrating from the desert to rivers in Siberia during winter. A small number of wild Bactrian camels still roam the Mangystau Province of southwest Kazakhstan and the Kashmir valley in Pakistan and India. There are feral herds of Bactrian camels in Australia.  Overnight stay at Nubra.

In the morning enjoy sunrise by a local monastery while the chants go along during morning prayers. Drive back the same way over the pass to Leh. Evening at leisure and for some last minute shopping around Leh town.