You are booking for : Tamil Nadu Odyssey Chennai–Mahabalipuram–Puducherry–Thanjvour – Kanchipuram (Land) 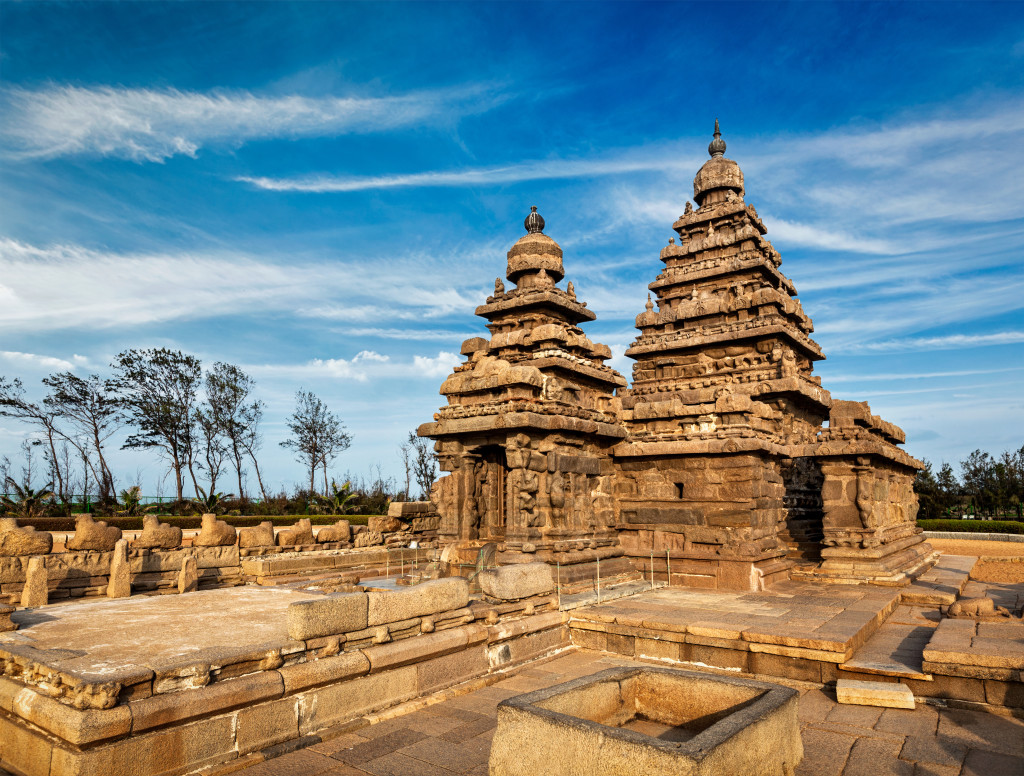 About Tamilnadu: Tamil Nadu is the cradle of Dravidian culture, one of the oldest in existence. Located at the southernmost part of India, it was spared the waves of invasion which shaped the north, and its languages, customs, art forms and belief systems are unique. Ancient pilgrimage sites dot the state, marked by fantastic temples and monuments, and the ancient past continues to shape a dynamic present. “Tamil Nadu can easily be referred to as the ‘The Land of Temples’ for its unmatched mastery in designing temples. Tamil Nadu is home to more than 30,000 temples with every one of them being an architectural wonder. The temples were constructed over a vast period of time by various dynasties.

About Pondicherry: Pondicherry (or Puducherry), a French colonial settlement in India until 1954, is now a Union Territory town bounded by Tamil Nadu state. Its French legacy is preserved in its French Quarter, with tree-lined streets, mustard-coloured colonial villas and chic boutiques. A seaside promenade runs along the Bay of Bengal and passes several statues, including a 4m-high Gandhi Memorial.

Arrive in Chennai. Upon arrival, you will meet with your Odyssey Manager, you will be driven to Chennai Local. Check into your hotel and retire for the evening.

After breakfast we start our sightseeing tour of Chennai.  Visiting Fort St. George, Fort St. George was originally just a warehouse with a stockade around it. But the establishing of Fort St George in 1639, for all practical purposes, marks the birth of the city. Today the Secretariat building (where the Tamil Nadu Legislative Assembly is housed). On completion we proceed to visit St Thome Basilca and Egmore Museum, established in 1851, is located in Egmore, Chennai. Known as the Madras Museum, the museum is the second oldest museum in India, the first being the Indian Museum at Kolkata, started in 1814. It is particularly rich in archaeological and numismatic collections. It has the largest collection of Roman antiquities outside Europe. Further to enjoy your walk on Marina beach, the longest beach in the world after the one in Brazil and is a must visit. After visiting the Marina Beach transfer to Hotel. overnight stay at Chennai

After breakfast, drive about 2hrs to Mahabalipuram, also known as Mamallapuram. A very peaceful and serene town situated on the Coromandel Coast is home for lots of backpackers and pilgrims. Visit the famous Shore temple along the sea side, 8th Century rock cut temple is crafted on a single rock from upside down in Dravidian style of architect. Post lunch visit the Arjuna’s Penance and Further to visit Five Rathas, are actually five monolithic temples, each created in a different style. They are modeled around chariots that are called ‘Rathas’ in Hindi. Also known as the ‘Pancha Pandava Rathas’, which means that each one of them represent 5 Pandavas, the protagonists of Indian epic Mahabharata. The most mesmerizing aspect of this monument is the fact that the four of the Rathas are supposed to have scooped out of a single rock formation.  On completion drive to Pondicherry overnight stay at Hotel.

After breakfast at your hotel, drive to the universal village of Aurroville, where residents of more than 50 different countries of the world live with common idea without any hindrances of cast, creed and religion. Visit Matri Mandir situated in the middle of the village, dedicated to Mother. Visit the one of must see place of Pondicherry i.e. Aurobindo Ashram, where great sage Aurobindo took his last breath and his soul rests in peace. Further to visit Pondicherry Museum. Explore the city of Pondicherry to witness the Indian and French architect intermingled with the time. Stroll along the beach is fascinating especially in the evening. Don’t forget to notice the Pondicherry police with red hat connecting them to french, only Police in whole India wear such peculiar hat.  Evening explore the little city of Pondicherry. 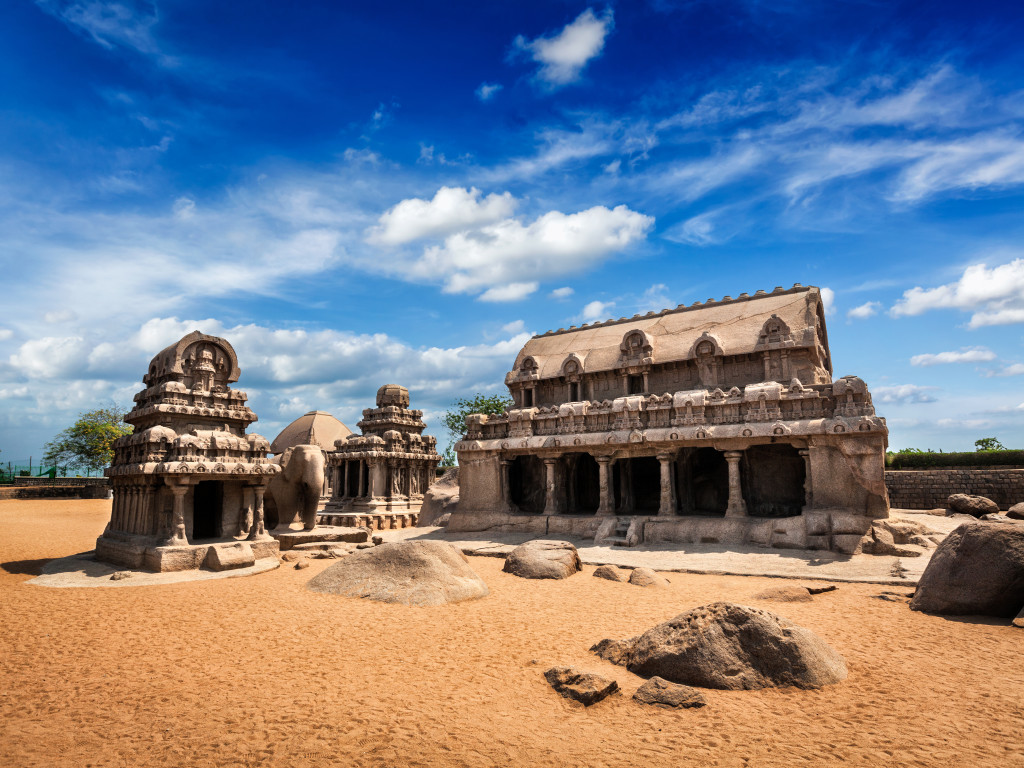 dia and is an fine example of Tamizh architecture during the Chola period. The temple was built by Raja Raja Chola I and completed in 1010 CE, The Temple is a part of UNESCO world heritage site, known as the “Great living Chola Temples”.  Later, Check into hotel for overnight stay.

After early breakfast we will drive to Kanchipuram, Ancient Kanchipuram, The City ofThousand temples, is one of the seven most sacred pilgrim centers in India. Kanchipuram owns 108 temples dedicated to Shiva and 18 to Vishnu. It has within its limits historical places like Kanchipuram and Mahabalipuram which are steeped in south Indian culture and have won acclaim for their great edifices and magnificent temples of exquisite architectural beauty. Kanchipuram is also known for silk. On arrival we will visit Kailasanathar Temple-  Built in the 7th century by a Rajasimha rular of the Pallava Dynasty, The Kailasanathar Temple “ Lord of the Cosmic Mountain” is built in the tradition of Smartha worship of Shiva, Vishnu, Devi, Surya, Ganapathi and Kartikeya, in Hinduism, a practice which replaced the Buddhism. Evening we will visit the Thalapathi Cotton Weaving Centre. Overnight stay at hotel.

After breakfast at your hotel, we will check out and drive to the Ekambareswarar Temple, This vast temple is one of the most ancient in India having been in existence since at least 600 AD. It is one of the five major Shiva temples representing the element – Earth. On completion drive 75km to Chennai. Evening free for leisure or shopping. Overnight stay at hotel.

Free and easy day for shopping and own activities.  Transport provided.  Evening transfer to airport.